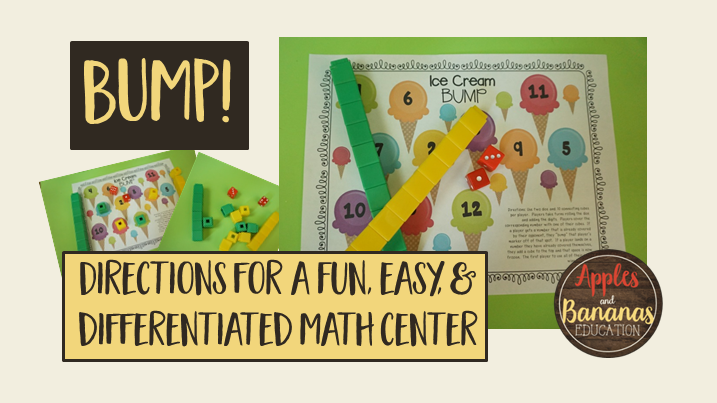 Bump is a math game that kids absolutely love.  It is easy to teach and implement right away in your classroom.  Bump is the most popular math center in my classroom because it gets kids interacting with each other while practicing their math facts.  They have so much fun and receive TONS of math facts practice each time they play.  It is easy to differentiate and you can add new themes or versions as the year progresses.

Who is it for?

You can begin using the game as soon as children are able to count and identify numbers to 12.  I’ve even used it with kids who aren’t quite at that point yet, as long as they play with a buddy who already had these skills.  The game can be used for older elementary students as well, as there are several multiplication and division versions available online.

How do you play? (Basic Version)

Directions: Use two dice and 10 connecting cubes per player. Players take turns rolling the dice and adding the digits.  Players cover the corresponding number with one of their cubes. If a player gets a number that is already covered by their opponent, they “bump” that player’s marker off of that spot. If a player lands on a number they have already covered themselves, they add a cube to the top and that space is now frozen. The first player to use all of their cubes wins the game!  We’ve created a pack of 20 BUMP games in our TpT store – for just a few bucks you can have several great themes that will last the whole year through.  Click here for 20 basic BUMP gameboards.  And if you’d just like to try it out, you can find a BUMP freebie here.

How can I differentiate the basic game?

Differentiating the basic version of the game is simple.  The easiest way is to use numeral dice instead of standard (dot) dice. This will force students to use alternate ways of adding the dice, such as using manipulatives (have counters available), fingers, number lines, etc.  After the facts to 12 have been mastered, I recommend switching to a 3-dice version of the game with facts to 18.  Students can use standard dot or numeral dice to add three 1-digit numbers and 12 counters each.  This is great for reinforcing many types of math skills, such as finding a ten first, adding doubles, picking two numbers you know how to add first before adding the third number, etc.

Another way to differentiate is to find an advanced addition bump game that uses the numbers 4-9 on each dice.  This will help your students learn their “larger” addition facts while adding two numbers.  And as I mentioned earlier, there are multiplication versions out there as well.  There are freebies all over the Internet, but if you’d like to grab a quick one, you can find an advanced BUMP pack here.

Expert tip #1: Model this game once or twice using student helpers.  It really doesn’t take a lot of modeling for students to “get it.”

Expert tip #2: This game makes a GREAT big buddy/little buddy activity.  It is so easy to learn and the extra facts practice never hurts the big buddies either!

We hope you and your students enjoy playing these different types of BUMP games throughout the year!